Night bus to Cusco, where I arrive at 5 am and go directly to the airport. My flight is at midday, but they book me on an earlier flight for free. I guess waiting in Lima airport is more pleasant than waiting in Cusco. The day is dragging, but I read, edit photos, drink about 2 litres of coffee. Next flight to Bogota, where I almost miss my connection, because the idiots in Lima were not able to check my bag for the entire itinerary, so I have to go through immigration. The check in is already closed, but they tell me I can board the flight with my big backpack as cabin luggage. The nice lady actually warns me that I indeed should take my luggage inside the cabin, if I ever want to see it again, because if I want to send it inside the plane, it will very likely get lost somewhere in the airport.

Next stop Mexico City for 10 hours stopover, just enough time to catch up with friends over an authentic mexican breakfast (and hot chocolate). Last flight of the very long day is bound for Vancouver – the entire reason I chose this complicated way to travel home was to spend a couple of days with my friend Ornella. In the middle of the take off maneuver the plane breaks suddenly and taxies back off the runway. I am expecting some dramatic arrest or something, police cars racing after the plane, but no such excitement is happening. Just some unexciting technical issue. Well, I guess it would quickly become very exciting if the captain ignored it. I have always wanted to put my own oxygen mask on before helping others, but maybe next time. Or never. Anyway, this means we first have to wait for one hour before the mexican mechanics grace us with their attention, then we wait another hour for the fuel truck to show up, and then another hour of queueing at the runway.

Vancouver in spring is gorgeous. I have been here in autumn previously for almost three weeks, so I have done all the hiking and sightseeing. There is not much to be seen in terms of sights, there is  about a hundred years old Big Ben in miniature that spits steam every hour and people take photos with it, much to my amusement. I was snobbishly thinking what the hell would they do in Rome, die of Stendhal syndrome? But there is the majestic nature, Vancouver Island is one of the most beautiful places I have ever seen. 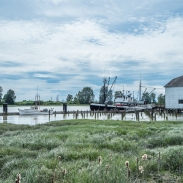 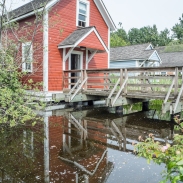 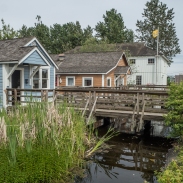 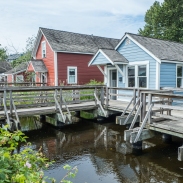 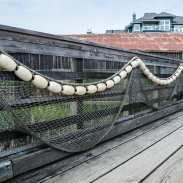 This time, there is no programme. I came to visit my friend, who I see only rarely since she moved to Canada, so it’s mostly gossip and girltalk. And eating. Vancouver has a huge chinese population and Ornellas boyfriend Eric is Taiwanese and a foodie, so he takes us on a food tour for the best chinese and taiwanese eateries in town. I cannot stop wondering how much better my time in China would have been if I had someone fluent in mandarin with me. Later we take a walk through Britannia Heritage Shipyards, former shipyard and cannery turned museum close to Richmond and we barbecue in the evening.

Eric in charge of the grill

I could definitely imagine a life in Vancouver. People don’t make silly money, but they have a good life-work balance. There is not much of a culture life, at least for my taste (I think the nearest opera house is in Seattle), but there are other things.  Also, people are super polite and men are fit. Then from what I hear they are about as accessible as people in London, but at least here I can flirt with waiters. In most pubs in London you have to fight to be served at the bar, so you have no time to charm the phone number from the bartender. 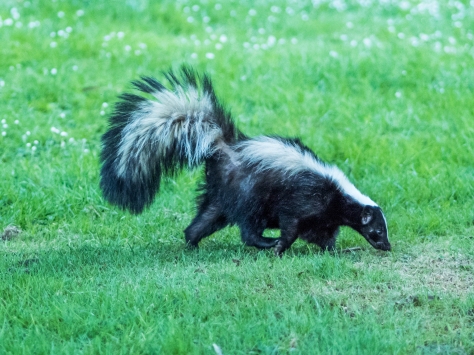 No one seems to be too conscious about what they are wearing, yoga pants seem to satisfy every dress code, which fits my current fashion mindset perfectly. As they say: when in Rome…

May 28 – I land in Prague just before midnight. Now the situation really becomes serious. I will probably have to decide what I want to become when I grow up. I could of course be a fashionblogger, as per the photo above. On Instagram. Quod erat demonstrandum. (Note to myself: set up an Instagram account). Oh shoot, I travelled the world without posting on Instagram. Has it all actually really happened, then?