Sixth week into lockdown and the light at the end of the tunnel nowhere to be seen. We can hardly expect any easing of the measures with several thousands of new cases a day in most countries. Which makes me curious, because we’ve really been in isolation here since six weeks (including exercising outside alone) and there is literally no one around apart from the occasional courier, so my question is: who are the new cases? More testing? (Nowhere near what would be necessary.) Multi-generational households? Medical staff (possibly)? I think it is time the governments look at the demographics of where the contagion is spreading and act accordingly, because something clearly isn’t working, and just staying at home hasn’t been doing the trick. Despite having somewhat casual relationship with the truth being the necessary condition to enter politics, in this case, governments must collect the real data (not data that make the countries look a little better in the international media, we are way past that point). And most importantly, for those of you who enjoy a good war metaphor, “carpet testing” is paramount. Everyone needs to be tested. For the disease and for the antibodies, if applicable. It’s not exactly rocket science, is it? Unless we have the real, truthful epidemiological data, we don’t really know what we are standing against, when it comes back, which it will. Otherwise, when they eventually do let us out, it’s going to be: go in peace and hope for the best. 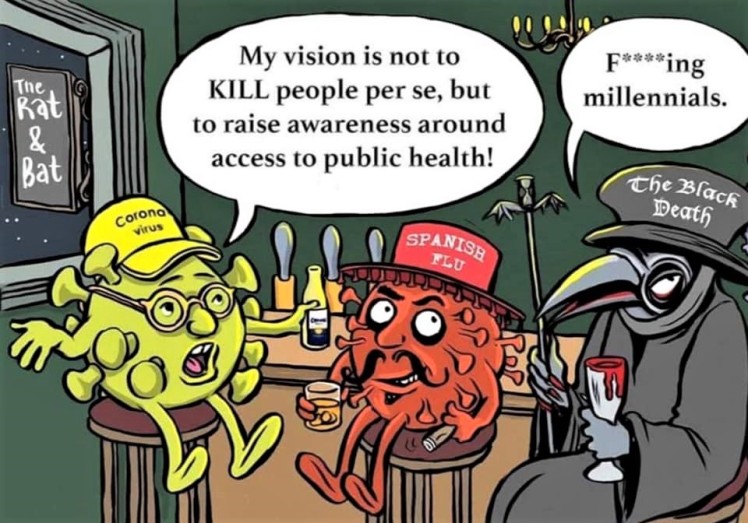 But no: governments are either incapable of or uninterested in collecting data. In Spain, family doctors (a GP that comes to your home) are instructed to sedate old people with Covid symptoms when there is nothing else left to do, so that they can die in peace at home, but they are not to be taken to hospitals, that way they stay out of the statistics. I know this first hand from a friend who’s job description recently changed from “practising general medicine” to “administering euthanasia at home”. Medical staff is denied swabs for as long as they are physically capable of working. There are no other doctors and nurses, so the potentially sick must do, as there is no replacement available. Care homes do not test their clients and do not record casualties. This is the case in the UK too. Only two providers of care homes in the UK collect covid-related information for the government. These two accounted for roughly 600 casualties in the last two weeks. They also manage only 3% of care homes in the UK, the rest keep their data, if they have it, to themselves. Someone calculated that it would take over 18 years to swab all of UK’s population. I find it hard to imagine. Surely someone clever is already working on a mass testing lab machinery able to process the tests at an acceptable rate. And after all, how different is putting in place mass testing stations to, say, organising a general election? It would not take a day or two, it would take a week or a month, but it is doable. If Prada, Gucci and Armani can switch production to manufacturing personal protection equipment, if Ferrari can halt the production of wankmobiles and make ventilators instead, if Bulgari and Ramazzotti can produce disinfectants instead of perfumes and liquors, then surely chemical, pharma and tech companies can be whipped into producing reagents and testing equipment. You’d think.

Meanwhile the only data our governments seem to be interested in is their citizens’ GPS location and card payment data. Yes yes, I know, we all use GPS location in many apps (I personally don’t, and I don’t even use any step-counting and heartbeat-measuring app nor have any loyalty card of any store, because it’s not anybody’s business how much I move and where, how healthy is the food I buy or which books I read), and I am perfectly aware that the state can access my phone’s location or my bank account information, if a court of law orders the phone company or the bank to make my data accessible. I am not requested to provide such data by default and I am free to leave my cellphone at home, or disactivate tracking services on it. To put it simply, blackmailing the population into giving up their movements (and other data) under the pretext of a public health issue, stinks. Today it’s a pandemic. Tomorrow it will be some doctor explaining that the public insurance will not cover your treatment because you buy too much red meat and don’t walk 10.000 steps a day. But most importantly, I know it’s difficult to understand for a society living in a permanent state of technological inebriation, a simple existence of a tracking app does not mean the coronavirus will miraculously disappear. They call it smart quarantine. The only smart action would be to start testing people en masse, not forcing them to be traceable 24/7. Otherwise, they know where I am and whom I meet but they still have no idea if I am spreading the virus or not.

I come from a country where this was the ruling party’s wet dream some 30 years ago, only they didn’t have the means. These days, people who grew up with the regime exult at the idea of having an app that sends a notification when they are near someone potentially infected. After all, every desperate housewife has a Tesco clubcard or Nectar card (or both, most likely), eager to give up her spending habits in exchange for a set of new pots at the end of the year, I really shouldn’t be surprised that people jump at the idea of downloading an app that offers them a possibility of public lynching should the above-mentioned situation actually occur, for the mere pound of flesh of being traceable at any moment. Now you may point out that if I have nothing to hide, I have nothing to fear. True, but that still doesn’t give the authorities the right to check, unless they strongly suspect me of wrongdoing, and for ordering surveillance we still have independent courts. For the time being. Besides, I may have nothing to hide when it comes to my geographical whereabouts, but the same certainly cannot be said about some people I’ve liaised with.

Also, has anyone else noticed that the countries that seem to cope best with the pandemics have one thing in common? Yes, some of them have low population density or favourable geography (Iceland, New Zealand, Taiwan), but for example Hong Kong, Nepal or Bangladesh have neither. Germany is in the middle of Europe where borders no longer existed prior to the pandemics, yet they have remarkably low death toll. Which may be due to some dodgy reporting, there’s also an excellent, well-funded public healthcare and the highest number of intensive care beds pro capita in Europe. And a leader they can trust. A leader, who as in the other above-mentioned countries also happens to be a woman. Now, I am not saying that just being a woman makes you a better leader, or better anything. There are terrible examples of female leaders. Aung San Suu Kyi. Jeanine Áñez (although even Áñez chose to approach the crisis truthfully, which seems to be working, so possibly a female fascist may still be more sensible person than a male fascist, eh Jair?). Or God forbid the UK ever tries to improve the leadership vacuum by letting Priti Patel to have a go. But as any woman who’s ever had ambitions in life (beyond covering her face in 50 shades of orange shit and posting a picture of the result of her effort on social media) will know, to get any job over a male candidate, she has to be better, she has to work twice as hard to be considered half as seriously. To become a leader, she has to be over-qualified. Which is why the Chancellor of Germany has a PhD in physical chemistry, while the UK’s PM is a failed journalist who built his career on fabricating lies, and the american President is a former reality TV host, not to mention a serial bankruptist whose neurons were practising social distancing years before the epidemic hit. He just suggested that injecting yourself with disinfectants may be a valid way of treating coronavirus.

On this note, as my internal disinfectant of choice is a bit more noble than chilled Dettol with a twist of lemon zest, over and out, it’s my birthday weekend! In the meanwhile, please, do not drink bleach, disinfectants, swimming pool cleaners or Lambrusco. Ciao!