Which is more or less what Krasnoyarsk means in Russian

I am impressed by how punctual the Russian long distance trains are. I arrive to Krasnoyarsk in the morning and go straight to my hotel. First emergency: find a washing machine. Almost all of my clothes are either wet from rafting or filthy from the muddy hikes, and either way thoroughly disgusting. When I open my backpack, it is like freeing the evil jin from a lamp.  Second emergency: a real shower. Banya is great, but standing under a hot shower for 15 minutes is just awesome. Third emergency: a proper toilet. I can probably spare you this one.

I meet my Krasnoyarsk guide Anatoliy at 2 pm. I came across his website when I was doing my research for the Russian trip, and it was the best thing that could have happened to me. Doing all that Anatoliy showed me is quite possible to do independently, but you will never have the same insight.  Anatoliy is extremely knowledgeable and speaks excellent English. The trip to the famous Krasnoyarsk dam is planned for the afternoon. We start driving along the river, and Anatoliy fills me in about history of Krasnoyarsk and the local culture.

First stop in the village of Ovsyanka, former home to the prominent Russian writer Viktor Astafyev. I am almost certain I must have read something of his during high school, but I don’t remember what. Well, I have all the time in the world to read just about anything, so I may as well add this to my Kindle, too. 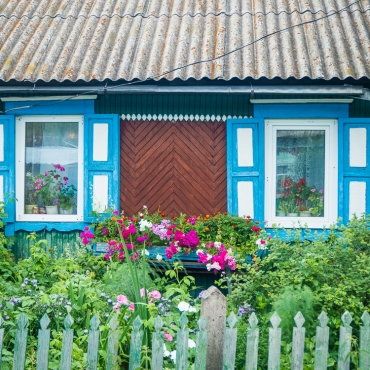 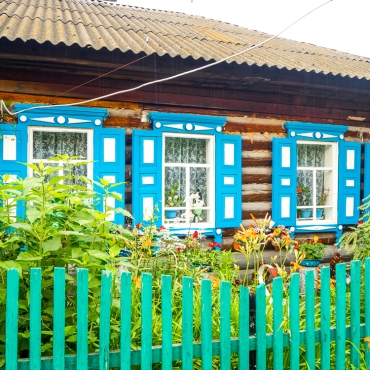 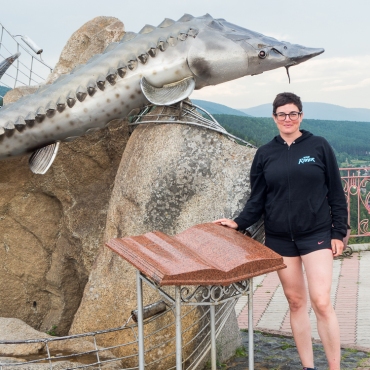 Second stop in Divnogorsk, the city born and blossomed with the construction of the dam, for a short walk on the shore of Yenisey. There had been a short thunderstorm, and thin streams of mist are rising from the river, which together with a decrepit entertainment park and some impressively old cars parked around is very suggestive. 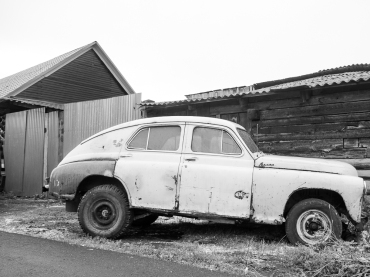 Finally, we make it to the dam. The size of the thing is impressive. No wonder it was (still is) considered the gem of soviet engineering. Anatoliy gives me all the technical details about construction, installed capacity, and the unique ship lift able to transport ships to the other site of the dam to Krasnoyarsk sea. Unfortunately, the water level in the dam is quite low, hence there is no water release, which makes the whole thing much less dramatic than I was expecting it to be, but Anatoliy tells me that last time this happened was 5 years ago. 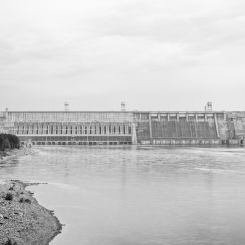 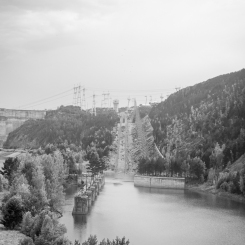 the rails of the boat lift on the dam

the turnplate of the lift 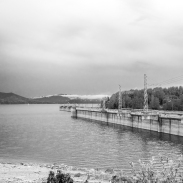 the secong leg of the boat lift leading to Krasnoyarsk sea

wires leading from the power plant

Meeting Anatoliy at 9 am, to head to Stolby Nature Reserve for a day – long hike. It’s a beautiful day. It’s sunny and it looks like it is going to be hot. My hiking shoes are almost dry, which is a progress, but I doubt I will ever get rid of all the mud. We set off for a 20 km long hike in the part of the reserve accessible to the tourists, which is only about 4 % of the entire park. There is a buffer zone accessible with a special permit, but most of the national park is totally restricted and serves ad wildlife sanctuary. There are bears, wolves, wolverines, all kinds of deer and stags, but for the moment, the only wildlife we see along the road to the central part of Stolby are cheeky chipmunks and squirrels begging for food (in fact many local have bags with seeds to feed to the little rodents). 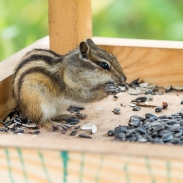 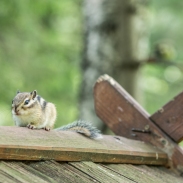 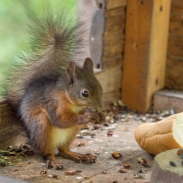 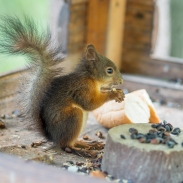 The first part of the hike is tiring. There is a short educational path about local fauna and flora, which is interesting, but soon we follow a monotonous tarmac road constantly rising through the woods. We reach the entrance to the central area, and I learn we hiked 7 km along that road. Well, it was worth it. We climb almost all rocks that are safe to be climbed, and there is a breathtaking view over the entire area from everyone. Again, you can do this on your own, but I was quite happy to be with Anatoliy, because I would have learned a tenth of what I learned today. 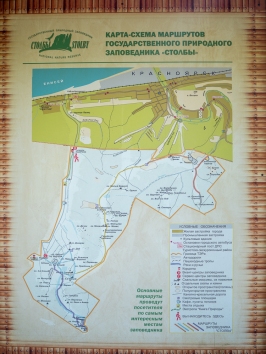 After the tour among the rock formations, we head back through a valley neighbouring to the one we ascended through. This walk is much more pleasant, and it ends with a skilift, that will spare us the harsh descend back to town. We are dirty and sweaty, and as I had a minor accident while climbing one of the rocks, I am also covered in blood. As we approach the end of the route, we start bumping into people on their Sunday walk. Women in high heel sandals, nice dresses, perfect make up and hairdo, and I am just thinking about how do these girls do it to look so great under the sun and with shoes I would not know how to  even sit with, let alone walk on gravel. We take the lift back to the valley, and Anatoliy gives me a lift to my hotel, where I manage to charm them into letting me use the shower even though I had already checked out.

entrance to the central Stolby

View from the Fourth rock over Stolby

People climbing without a rope make it look so natural

well, this happens (all the time)

A fully merited beer at the end

My train to Irkutsk leaves at 1 am, which leaves me a little bit of time for dinner and a short walk trough the city. That’s Kacenka for you reporting from the Siberian capital, I will be back from Lake Baikal soon.