There is that scene at the end of the last episode of the third season of the Sopranos where Junior sings “Core ‘ngrato” at Jackie Aprile’s funeral party. It’s a beautiful scene. Perfect, even. One époque is coming to an end, all kind of mess is coming up in the next season, and then there is Meadow, Tony’s young daughter, and her “this is such bullshit” line as the central point of the scene. Exactly. This is all bullshit. But also, it’s all over, don’t give it another thought, Katarì.* So what follows are my good-byes to one chapter of my life.

I’m weird. That’s hardly a news to most of you. However, as a further twist to my weirdness, I like to wash dishes. I like to clean after a party. It gives me peace. It makes me feel like I am bringing order to the world. Although, cleaning after my leaving party took the experience to a whole new level. I mean, anyone can organize a barby and grill (awful english) sausages or (taste-the-difference-by-Sainsbury’s ready-made) burgers. To roast an entire pig, on the other hand, takes class. To clean the grill the morning after takes dedication (and a fair amount of cursing). The party was great. Thank you to everyone who turned up.

So, that was my leaving barbecue, followed by two rather hectic weeks of good-bye drinks and dinners, packing, sending stuff home, and more drinking, because I could not have possibly faced all that sober. Taking all those things off the walls. Photos, concert tickets, setlists, medals, trophies, acknowledgements from all the races and rides, all the souvenirs I have been surrounding myself with for the last five years to have a constant reminder that I do have a life in London. All of them useless. OK, maybe not all of it completely useless. Some of the activities I threw myself in actually generated over £5000 for various UK cancer research charities, so yeah, some of my make-believe life had some purpose to it. Also, during the (champagne-assisted) packing, I discovered how many souvenirs from my exes have I kept over the time (read: how many pieces of clothing have I stolen – or less frequently been given – from various men over the years). Oh, well. As long as I can keep track of what used to belong to who, it’s all good, I guess.

3 – the very last thought of London

It hasn’t all been bad, of course, and chances are I am going to miss some bits of London, eventually. The concerts, the exhibitions, the Royal Opera House, the availability of any world cuisine in an acceptable standard. Yes, the Brits are only capable of frying a fish on fridays and drying perfectly good meat in the oven until it’s turned barely edible on sundays, but at least they had enough sense to import food from the colonies. The few days in the year when the weather’s lovely and the town becomes for a brief moment almost charming. I will miss Siegmund, of course. I will even miss some people. Most of you probably don’t give a flying toss about what or who I am going to miss. 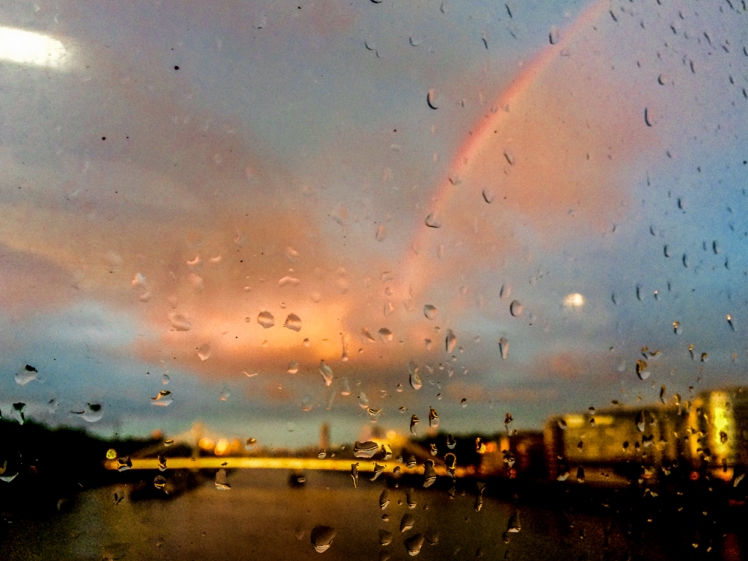 4 – the very last thought of my former job

Until yesterday I was a bit pissed off with the world, feeling a bit bitter about how it all ended in my office. This is not a fit place to moan about a job I have already left, and I wasn’t of course expecting tears from my colleagues (of joy, if anything, I am leaving a fair bit of money on the table after all), but a card would have been nice. Not flowers, or a bottle of some liquid headache. A bloody card, for fuck’s sake. In the country where people give each other a “get well soon” card for a broken nail. On the other hand the biggest issue my (former…FORMER) HR seemed to be concerned with was that I was to delete any connection to the company from any social media within 24 hours. Oh, with pleasure. Why is it these complete bankers are so full of themselves?

Anyway, all this does not matter anymore. I said I would resign and go travelling, and I did. This is all really happening, at last. I am scared, of course I am, I am shitting my pants to be quite honest, but I also know it’s going to be the greatest thing I have ever done. I am even a bit proud of myself that I am not one of those people who “are soooo jealous” and who “wish they could do something like that”. Point is, everyone can do something like this. I am not saying everybody has the luxury to tell the entire world that they can piss right off and piss off themselves, but I am convinced that it is within power of most people to do something if they feel like they are stuck, unhappy and unsatisfied or leading lives they don’t really want to be leading. Problems of the first world… Something can always be done. It only takes courage. Balls. Desperation, maybe. A tiny bit of recklessness, for sure. I never lacked any of these. There must be more to life than waiting for fridays week after week. I’m about to find out.

* A paraphrase of part of the lyrics of Core ngrato:  Tutt’è passato, nun ‘nce pienze cchiù. All is gone now, and you don’t think of us any longer.