This is a flashback entry, but the photos have not been published anywhere else. Well, all the pictures were taken with my iPhone 5, so they are nothing special, on the other hand, Scottish scenery is so hauntingly beautiful, that one has to develop a significant effort to manage NOT to take nice photos.

Sometimes one just needs to be alone. Sometimes one needs time – and space – to think. Sometimes british, Scottish even, summertime with its gloomy light, hardly any sunshine, temperatures that peak at 17 degrees and wind that never stops blowing from the North Sea is a perfect reflection of one’s state of mind. There is no better place, no more isolated place if one seeks repose from the hell on Earth called London. Nature can be lethal, as Percy Bysshe Shelley confirms, still the Gulf of Poets in Lerici (Liguria, Italy), is one hell of a scenery for an early exit. Nature mostly heals though, or at least soothes. So does time.

And time has indeed passed since I fled to Scotland in search of solitude, not enough to heal, but enough to be able to look back. While writing this, my flatmate receives a visitor, who talks like bloody Donald Duck on speed. The guy arrived 5 minutes ago, and hasn’t shut his mouth for one moment since. I unwillingly learned about his job, his wife’s job, his stomach issues, his holiday plans and I stopped listening after that, politely nodding occasionally, wishing to be on the deserted beach in Dornoch (pictured above), or anywhere else with no people. 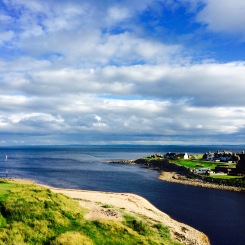 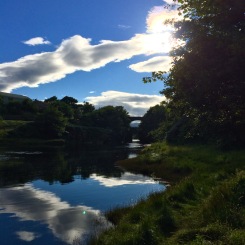 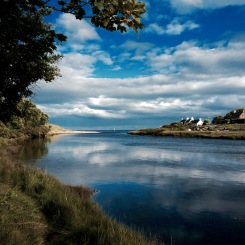 Brora – about 90 minutes drive north from Inverness. A pretty village with several golf courses (aren’t they all) which was my base. To be honest it was the only hotel I could find in summer in Scotland on one-day notice. At least it was a good hotel, with nice kitchen and more importantly, extensive wine list.

Trip to John O Groats and Duncansby Head – 2 hours drive along the coast north. John O Groats is the northwesternmost bit of mainland UK where ferries for the Orkneys depart from. I parked the car in the village, followed the coast from the harbour to the Duncansby Head lighthouse and further south on the cliffs where a breathtaking view on the stacks opens, and then took a path that was supposed to take me back to the harbour. Unfortunately, the path disappeared at some point and I was stranded in the middle of very damp moorland, and the 1 mile hike back to the village took me three hours of very unsteady and very wet jumping across puddles of water. 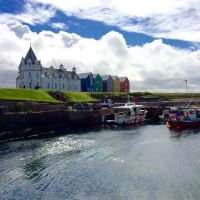 Stroma Island – I boarded a ferry in John O Groats harbour which took me on a 2 hours wildlife trip around Stroma, which has been uninhabited since the 50s except for sheep, seals (allegedly about 60 thousands of them, which beats the sheep population: well done, seals) and puffins. 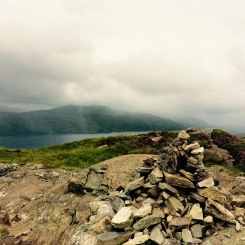 Ullapool – Relatively easy to reach from Inverness, but a pain in the arse 3 hours drive from Brora on a single track road through some serious breathtaking scenery. Along with driving across Vancouver Island, this has been probably the most beautiful drive I have ever taken. So, Ullapool. Supposedly the hiking capital north of the Highlands. And indeed the place WAS full of people dressed as hikers. Fully geared-up with fancy shoes and state-of-art functional clothes, yet when I set off for the hills, I hardly met anyone. I did meet a very nice German girl on the Ullapool hill peak, she was travelling on her own too. We chatted through the descend, and discussed the uselessness of mankind (or is it malekind) over a coffee, and then said goodbyes. 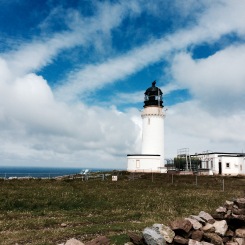 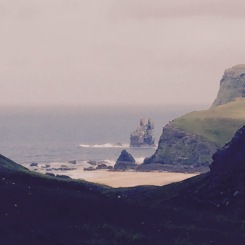 Back to Kyle of Durness

Cape Wrath – hey, any suggestion for what to on a Sunday? Well, yeah, there’s THAT. When  THAT is scarce, a little 11 miles stroll in a military shooting range is the next best thing.

There are several ways of reaching the northernmost bit of the UK. One can hike from the south along the coast across the vast moorland, which I prefered to avoid after the wet and exhausting experience from two days before. Also, this option would have meant hiking back too, and that probably wasn’t doable in one day. The easier way is to drive to Durness and Keodale and take a ferry (well, whatever that thing was) across the Kyle of Durness, and then follow the old military road for ten miles all the way to the lighthouse.

The remote area is a working military shooting range, where the marines and the air-force jointly exercise several times a year, firing missiles from the sea at the targets in the range. Apparently the area served as a playground preceding the Falklands adventure, because  the landscape is almost identical.  When the boys (and girls) don’t play with guns, the area is open to hikers. Although the ever-present warnings not to wander off the path and not touch the military debris as it may blow you to pieces are rather amusing.

There is a shuttle bus taking tourists back and forth between the pier and the lighthouse, the journey is a pain, but it’s an experience worth doing. The bus is a vehicle built by a company that went bankrupt in the nineties, it smells as if it normally served for transporting goats (and who knows) and the one hour drive on the road that had been tarmaced in the 50s and never since takes no end. However the driver/guide is very knowledgeable and funny and tells you all sorts of interesting stuff.

We reached the lighthouse by midday, and I decided that I wanted to hike back to the pier instead of taking the bus back. I told so to the driver, and we agreed that I would stick to the road, and if I was still on my way when they were returning from the last trip of the day, they would pick me up as I needed to take the last ferry across the kyle (because my car was parked on the other side). There is a 24h cafe in the lighthouse manned by a nice enough guy who I am sure has heaps of stories to tell, only he wasn’t exactly chatty. I guess one has to be a certain type of person to choose to live on his own literally in the middle of nowhere. 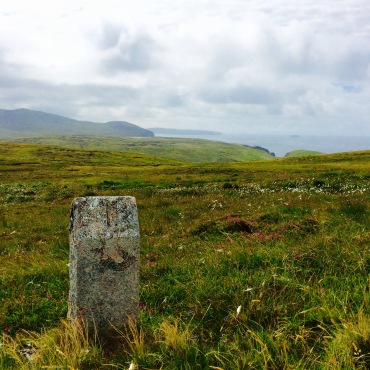 The walk back was one of the most bizarre hikes I have ever done. I was alone. Completely alone, isolated, in this vast landscape of incredibly haunting beauty, between lochs and rolling hills, and the ocean in the distance. I walked past bomb craters, brightly painted old military vehicles that served as targets, and various debris. The bus drove past me twice, it took me about three and a half hours to reach the pier, and I still had to wait for a good hour before the last bus came back. 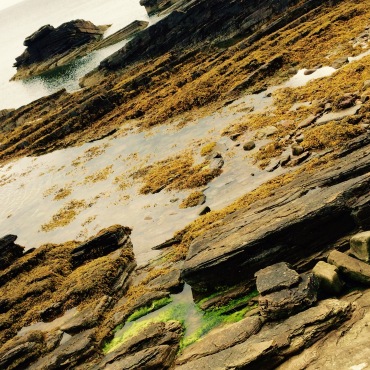 I was restless though. I grew more restless as the trip approached its end and return to London became imminent. On the last day, I did not know what to do. I just sat in the car and started driving, stopped in a random village, and started walking along the beach. I saw a sign stating “cave – 0.5 mile” and thought – well, why not. I spent good 4 hours sitting in the cave and reading Neil Gaiman’s Trigger Warnings, until I managed to freak myself out enough to head back into civilisation. That, and I was hungry, too.

Well, the trip did not bring me peace, nor did it lead to the outcome  I was hoping for, but I guess you can’t always get what you want.

Sometimes, you get what you need.